A ‘Cry Room’ is Being Considered for Students Offended by Tweets For close to 250 years, men and women of the United States had prayed, dreamed, and fought for their liberties in the most successful governmental experiment in world history. A nation that asserts that its citizen’s rights come from God, not from the government.

As what many call “The Greatest Generation”, those Americans who grew up during the Great Depression and fought in World War II, or whose labor helped win it, passes away, there is a renewed focus on who in the Millennial and Gen Z generations will lead the nation into the AI / Robotics future.

This search though has actually revealed some alarming trends in both groups, as many of them can’t emotionally handle the contents in tweets they disagree with.

In the next step in the evolution of these mentally crippled young adults, who appear to have arrested development, their “safe spaces” which are available on many college campuses may not be enough. These spaces allow students to escape from those who will not coddle them but now some want an additional room set up for them to hide from a mean world. 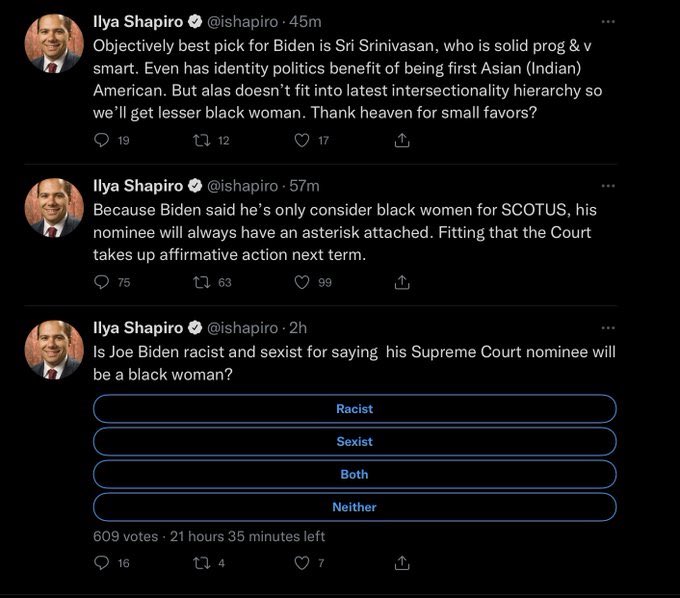 The law scholar Ilya Shapiro, who was scheduled to begin his role as executive director and senior lecturer of the Georgetown Center for the Constitution on Tuesday was instead placed on administrative leave on Monday.

“Over the past several days, I have heard the pain and outrage of so many at Georgetown Law, and particularly from our Black female students, staff, alumni, and faculty,” Bill Treanor, the dean of the Georgetown University Law Center, said in a statement.

“Ilya Shapiro’s tweets are antithetical to the work that we do here every day to build inclusion, belonging, and respect for diversity,” Treanor added.

Bill Treanor, dean of @GeorgetownLaw, says Ilya Shapiro will be placed on administrative leave pending an investigation into whether he violated policies and expectations for professional conduct. pic.twitter.com/0jor978xSs

Shapiro simply expressed his professional opinion that President Biden nominates Sri Srinivasan, the Indian-born chief judge on the Court of Appeals for the District of Columbia, to replace Justice Stephen Breyer on the U.S. Supreme Court, and commented that choosing a Supreme Court nominee based solely on race and gender would make it so that she “will always have an asterisk attached.”

Law students became outraged over these comments, with one calling on the university to implement a designated crying room on campus, for students to go to when they “need to break down,” according to a report by National Review.

“Is there an office they can go to?” the student asked. “I don’t know what it would look like, but if they want to cry, if they need to break down, where can they go? Because we’re at a point where students are coming out of class to go to the bathroom to cry.”

A small group of student activists in the Georgetown Black Law Student Association submitted a  petition calling for Shapiro’s termination. Not feeling like the university was doing enough to punish the professor for offering an alternant opinion, the snowflakes sent out a message last night announcing that “a coalition of Georgetown Law Students will gather for a sit-in calling for the immediate termination of Ilya Shapiro and for the administration to address BLSA demands”:

“A coalition of Georgetown Law Students will gather for a sit-in calling for the immediate termination of Ilya Shapiro.” pic.twitter.com/2ledavxFuc

The students do have a radical SJW supporting them, associate vice president and dean of students Mitch Bailin. Mitch said he agreed with the student, telling cry room girl, “It is really, really hard to walk out of class or a meeting in tears, and you should always have a place on campus where you can go.”

Obviously, those of us in Gen X must plan on having to work late in our silver years as we don’t have anyone right now to hand off the baton of liberty to.

Hopefully, more in people their 40s and younger decided over time that being a snowflake is un-American, seen by Russia and China as weakness, and thus deice to join in the fight after all.